Yo Zushi: I thought I’d record this to mark the tenth anniversary of Elliott Smith’s death. Back in 2003, his death affected me in a way not too far removed from how Princess Diana’s death affected other people – it was weird to mourn a stranger.

I’m currently involved in making a zine called Fond Farewells about Elliott Smith, Mark Linkous and others – musical heroes who were around long enough to inspire us, then suddenly died. Sounds morbid but it won’t be!

An event to launch it – and also to celebrate the music of Elliott Smith – will take place on Saturday 26 October 2013 at the Dentist, 33 Chatsworth Road, Clapton, London E5 0LH. More details (line-up, etc) to be confirmed. Come back here for updates. Thanks…

As far as I know, I don’t think there’s a studio/8-track version of “Come to Me” circulating: I’ve heard a few live versions, that’s all. I got the tune and words from a dodgy bootleg. I arranged and recorded this in the style Elliott used to go for in his Kill Rock Stars era. I had my Tascam 4-track to hand but… this is 2013. Hope you like it. My sister sang harmonies in the choruses. I did the video.

On a related note, here’s my recent interview with long-time Smith-collaborator Sam Coomes of Quasi: http://www.newstatesman.com/culture/2013/08/sam-coomes-quasi-internet-has-demystified-idea-being-band

Yo Zushi interview on Miso Ramen!

The title above makes it sound like I talked to people about buckwheat noodles. To clarify: I did a video interview with the cool Japanese/UK culture blog Miso-Ramen.com – it’s subtitled in Japanese, which I think is great. I play a song called “Send Your Love to Me”, from my next album, It Never Entered My Mind… not Smalltime.

Better late than never… Here’s my video for “Something New”, taken from the zine album Smalltime, which launched in May. By “zine album”, I mean an album of songs that is accompanied by a zine. For some reason, I did it as a cassette, too. You can download mp3s of it at yozushi.bandcamp.com. The video was my attempt to do a John Lennon / “Mind Games” sort of thing, but it came out more Elliott Smith / “Coming Up Roses” (minus paranoia). I shot it at my local launderette on Blackstock Road, which is in Finsbury Park! By the way, the zine album is in low supply – most have been sold or given away!

Viva Quinto! – a zine about Quinto Bookshop on Charing Cross Road and London’s second-hand bookshops in general – launched on Saturday 22 June at… Quinto, as part of the second annual Charing Cross Road Festival, organised by Foyles. Alongside weird and wonderful book covers chosen by Zoe Taylor, the zine features “Small Plays” by Emily Cleaver, photographs by Sasha Ilyukevich, writing from me (Yo Zushi) and an obituary for the book collector Jimmy Kanga, who died in autumn last year. The first batch sold out! But we’ll make up some more this weekend (29/30 June), after which it can be bought at Quinto Bookshop, 72 Charing Cross Road, London. (Ask at the counter).

Ross Palmer’s new single “Little Differences” b/w “Can You Explain” is available now from here as part of the Board of Fun Download Singles Club. It’s a breezy West Coast pop song recorded entirely by the multi-instrumentalist Ross. We launched it on Saturday 4 May, as part of Board of Fun’s Clapton Zine and Print Fair. The video was directed by me, Yo Zushi.

Yo Zushi returns from a three-year hiatus with his new zine and album Smalltime.

Hailed by Mary Anne Hobbs (BBC Radio 1) as “the spirit of Bob Dylan for the 21st century”, Zushi has released two albums on Pointy Records and a cassette on Italy’s Best Kept Secret Tape Label.

Of Songs from a Dazzling Drift (2005), Q Magazine said: **** – “This could be the start of something major”;  Dazed & Confused called it “a masterclass in storytelling”. Steve Lamacq of BBC Radio 2 praised Notes for Holy Larceny (2008) for its “raw and intriguing singer-songwriter talent”; Q compared it to “Richard Hawley with knowing winks”. Amelia’s Magazine gave it a five star review and wrote: “All the credentials to be the under-sung musical hero that we just don’t get any more… Excellent.”

Zushi will release three albums this year; Smalltime is the first.

Details of the launch show on Saturday 4 May:

Board of Fun presents 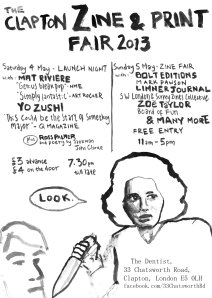 Board of Fun and Stars and Flowers present the first Clapton Zine and Print Fair at the Dentist!

The launch night on Saturday 4 May will feature a selection of zines and live music from:

Yo Zushi
“A masterclass in storytelling” – Dazed & Confused
“This could be the start of something major” – Q Magazine
Yo Zushi will be launching his new album/zine “Smalltime“.
www.yozushi.net
https://soundcloud.com/yozushi

Plus Ross Palmer, who will be launching his Board of Fun free download single “Little Differences”.
https://boardoffun.wordpress.com
https://soundcloud.com/#rossjpalmer

And live poetry from the south London legend and our compere Jazzman John!

The main fair on Sunday 5 May will be open between 11am and 5pm. ENTRY TO THE ZINE FAIR IS FREE. The venue will turn into an indoor market selling zines, prints, cassettes, poetry books and badges from London’s most exciting DIY artists and publishers (see above list for some of the highlights).
See you there!

It’s been a good (if Arctic) year for Board of Fun collaborators so far. Come and say hello when we next convene at the BoF zine fair and music night, now confirmed for 4 May 2013 at the Dentist, 33 Chatsworth Road, Hackney, London. More news of that to follow. Meanwhile, I thought I’d point you in the direction of some of the extra-curricular work we’ve been up to.

It’s a mysterious and subtly odd drawing that does a lot without giving too much away. See more of Zoë’s work at her website.

Meanwhile, Ross Palmer (who produced my next album, Smalltime, and has long been a writer for this blog) has started his own music site called SongsFromSoDeep. Lots of great writing from a practitioner’s perspective, as well as wider socio-political ruminations…

And here’s an article from the beginning of the month that I wrote for the New Statesman magazine about the demise of the Lorelei in Soho. It was a small, independent restaurant that had fed Londoners since the late-1960s and somehow managed to maintain an unfussy, family atmosphere till its closing night. Mr Bravin and Faye, you (and your Diavola pizzas) are missed.

Oh, and this is a picture of our friend and BoF veteran Tim Street, taken that evening: 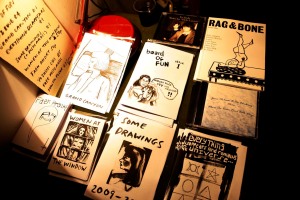 Zines from Board of Fun, Zoe Taylor and Sean King!

If you came to the last zine fair and music night at the Dentist in Hackney, you’ll know what to expect – we’re going to have stalls selling the best zines we’ve come across (or have stapled together ourselves), capping it off with live music from members of our loose collective. Only this time, we’ll (try to) make it even better.

If you’d like to get involved (send us your zines, offer to play on the night, etc), please get in touch: boardoffun@hotmail.com or yozushi@hotmail.co.uk
See entries below for pics of zine launch 1.

Meanwhile, we’re putting the final touches to Ross Palmer’s instalment of the Board of Fun singles club, “Little Differences” – it’s a sparkly slice (if that’s edible?) of 1970s West Coast pop that will be available for free download in the next couple of weeks. Check back here soon.

Finally, I (as in, Yo Zushi) will be releasing a minimum of three albums this year; the first of which, Smalltime, is almost done and will be let loose at the zine fair. Zoe Taylor and I did a quick video for one of the songs from it yesterday (“Something New”); a link will make its way here in a day or two.

Here, belatedly, is the third instalment of the Board of Fun download club: a great two-song set from Sean King, co-founder of the soon to be resurrected 1990s/2000s noise label Eidola Records and lo-fi songsmith in his own right. Recorded one summer’s day using a single microphone, these songs come unadorned and bullshit-free – they’re what they are, and what they are are small gems.
Listen/download the A-side, “One Last Dance”, here.
The B-side, “A Bottle of Whiskey at the End of the World”, can be found here.
Artwork by Sean King. Recorded by Yo Zushi.